So Why Am I On This Weight Loss Journey?

This was a week when I really wanted to evade my weigh-in.  After getting off to a flying start in January and February and losing over two stone, I had a stumble this week. I went out for dinner twice and made all the wrong choices. I must have been in a food frenzy or carried away with the excitement of being out at about after a long time of hiding away in the shadows.  I ordered steak and forgot to ask for salad instead of chips, forgot to order the sauce on the side, asked for dessert without ice cream and ended up with extra white chocolate and whipped cream, which someone in the kitchen felt was a good substitution. Of course, I could have handed things back, but I was committed, and the sugar rush was enjoyable for all of 10 minutes – followed by a guilt trip.  I know, guilt is a wasted emotion, but maybe it’s my Celtic DNA, it just seems to follow me around.  Anyway, the guilt lasted much of the week until it finally caught up with me in the form of an ‘incident’ involving a bacon sandwich and half a pack of mint chocolate Viscount biscuits.

This eating/guilt/eat ‘trap’ brought me to Wednesday morning and my impending weigh-in at Slimming World Dunshaughlin, County Meath.  I actually had a good and genuine reason to skip the weigh-in, because I needed to be on board a flight to the UK to join my brother who was undergoing a scheduled surgery. If I just went straight to the airport, no one would judge me or think badly of me.  Except myself that is. I suppose guilt can be a double-edged sword, and in this case, it shone daylight into my soul, and I knew all I really wanted to do was skip the scales of justice – or in this case the scales of Slimming World.  I threw the dilemma out to Facebook, and the Samsons of social media disagreed over whether I should go or stay. In the end I decided to take it on the chin and weigh-in but skip the meeting to save time. So I drove to Meath enroute to the airport to ‘weigh and run’ or in this case, ‘weight and fly’.

I checked in, walked to the scales like Joan of Arc approaching her fate, stepped up, held my breath and imagined myself slimmer.  ‘Down Two’ was the verdict, and I burst into a triumphant grin.  Turns out that not only was I down two pounds on last week, but it meant I had reached my 2.5 stones award and my 10% target.  I have lost ten-percent of myself in ten weeks.  I am absolutely delighted and I’m amazed. If I hadn’t gone to weigh, I would never have known. I would have imagined that I’d failed, and I might possibly have fallen into a comfort food blitz and truly been up in weight next week.  Another life lesson learned along this weight-loss journey. Someone on Facebook said over the weekend that not facing up to a challenging week was the start of two weeks of failure.  There’s a lot of truth in that, and it doesn’t just apply to weight loss. 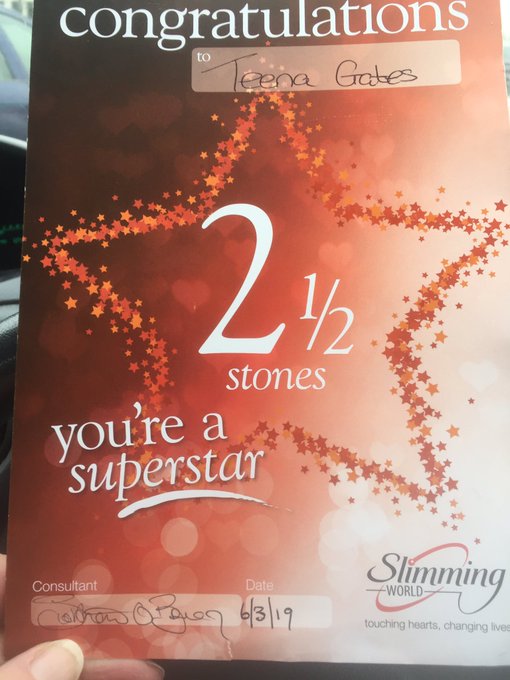 @TeenaGates
Thanks for all the good advice yesterday. I was tempted to skip my @SlimmingWorld weigh-in because I thought I’d had a bad week – I’d eaten out twice and made poor choices…. and there was an ‘incident’ with bacon and half a packet of biscuits. But I went & was DOWN 2lb.

Today here in London I had several striking reminders of why I’m doing this, and how that 10 percent weight loss is already changing my life and the lives of others.

I flew from Dublin to Gatwick on Ryanair and it’s the first time in a year that I haven’t had to have airport assistance.  I walked through Terminal One without my back seizing up.  I still needed an extension belt on the plane, and I couldn’t pull the meal tray down over my belly – but I did fit better into the seat and the arm rests didn’t leave bruises along my ribs.  I also can vouch for the healthy options menu that Ryanair has introduced on board.  I had ratatouille and pasta, kcal 270 and a bottle of water for under a tenner.

Today, I walked miles around the hospital during my brother’s op (he’s fine by the way). I went shopping for walking shoes, which is the first time I’ve been able to walk around shops for months without my back seizing up.  I was able to take in the sights of the beautiful English Cathedral city of Chichester, without huffing and puffing and moaning and feeling sorry for myself.

All these wonderful things that I was able to do, were beyond my reach just a few short months ago.  At Christmas I couldn’t have done what I did today. This is why I’m losing weight, and this is why this is an important journey; for my health, for the strength to look after #Dad(93) and the energy and ability to simply enjoy things in life which I previously had taken for granted when I was fit.

Talking about dad.  He’s being well looked after while I’m away, but he still manages to find himself at the centre of quite a bit of interesting drama. Half past two today, my mobile hopped with messages from Dublin, to say that #GoogleDog our German Shepherd ‘rescue’ had been rescued from the street and was now in the possession of my very worried neighbour the heroic dog catcher, Sinn Fein Councillor Paul Donnelly who couldn’t get my 93-year-old dad to come to the door. Fortunately, Google had merely availed of an opportunity to skip out the side gate, and dad was too busy clipping the roses to notice the missing mutt or bother answering the doorbell.  So, panic averted and thank you so much Cllr Donnelly.  It’s even more ironic when I remember that it was just last week, I was teasing you on Twitter because Google sniffed at your campaign leaflets when they landed in the mail.  Both Google and I apologise.

Google’s safe, Dad’s happy, the brother’s doing well, and so am I.  In fact, sitting down at the computer right now, my Fitbit’s just flashed up that I’ve done 10,000 steps today. Now that’s twice my daily average and I couldn’t have done it even two weeks ago.  With the help of all the support I have around me, I am now a week closer to finding my inner me. Thanks again.

This site uses Akismet to reduce spam. Learn how your comment data is processed.